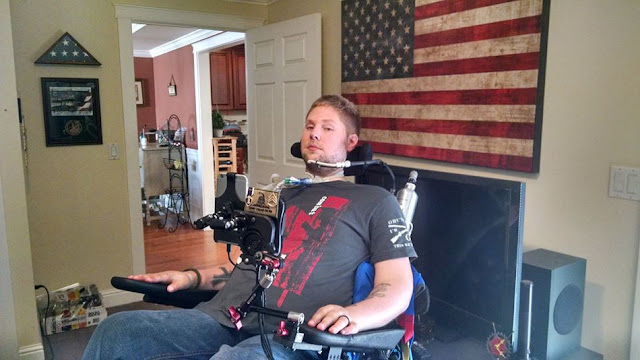 While serving in Iraq as a medic in the U.S. Army, Ian Ralston was hit with a tiny ball bearing from an IED in 2010. He was left paralyzed from the neck down.
Despite the hardship, Ralston quickly adopted a "make the best of it" attitude. "To me, there's absolutely no point in being upset about it," he told  nearly a year after he was injured.
"I mean, yeah, it sucks. And if I had my choice, no, I wouldn't be in a wheelchair.
But this is what I got right now. So I might as well make the best of it. If all you want to do is be upset about it, it's just going to make it that much harder for you to live with it, to cope with it. So I got past that quick."
That attitude has helped Ralston thrive. He's married, has newborn twins and uses a special wheelchair that helps him accomplish daily tasks—even operating his smartphone.Like most new parents, Ralston posts photos of his children to Facebook, where he also posts status updates about his life.
Ralston does this using an iPhone 6 Plus — a phone he got eight months ago. The iPhone is Ralston's first smartphone.
"I got injured before the smartphone craze, so getting one now is really cool," Ralston tells me.
Many of us are familiar with accessibility options for visually impaired individuals; screen readers make it possible for users who are partially or fully blind to still read a computer screen. Dictation software has made it possible for those who can't move their arms or fingers to communicate.
But accessibility tech goes a lot further than that. Ralston, for example, is able to operate his iPhone 6 Plus using his mouth. His wheel chair uses what's called a sip-and-puff system. Blowing or sucking into a tube can move his chair around. It can also control the screen on his iPhone.
The iPhone connects to Ralston's chair using a small device called a Tecla Shield. This is basically a bluetooth adaptor that connects his phone — which is mounted on his wheelchair — to the wheelchair's sip-and-puff controls.
The Tecla Shield is designed to work with iOS devices running iOS 7 or higher. Using a feature called Switch Control, Ralston can control and access different parts of the screen using his mouth. Having access to a phone gives him freedom and a sense of independence he didn't have before. "I'm on a vent because I can't breathe on my own," he explains. In the past, this meant that if he couldn't leave the house alone — in case something happened (a battery got too low, some tubing started to come out). Now, he has some independence and call his wife on her phone if he needs assistance.
"That was something I could never do before."
But it's not just the big stuff. Like most guys his age, Ralston is into fantasy football. He told me about how he recently was out and got a notification of an important movement that would affect his lineup. Using Yahoo's official Fantasy Football app, he was able to make changes to his team based on that news. "It sounds really trivial," Ralston concedes — but I disagree.The reality is that most of us use our phones for a mix of reasons. The fact that Ralston can change his lineup no matter where he is — just like anyone else — is huge.
"I send texts [using the built-in dictation feature] and check Facebook like anyone else," he says. He also uses Siri to look some stuff up — a game score or the weather.
The iPhone isn't Ralston's first experience with adaptive tech. He has used Dragon's Naturally Speaking software on his PC laptop for a few years to dictate emails or posts. He also uses his mouth to control his computer's mouse.
Still, the iPhone is a new experience because it is attached to the chair and as a result, can go everywhere with him.