Tattoo That turns body art into a fitness tracker 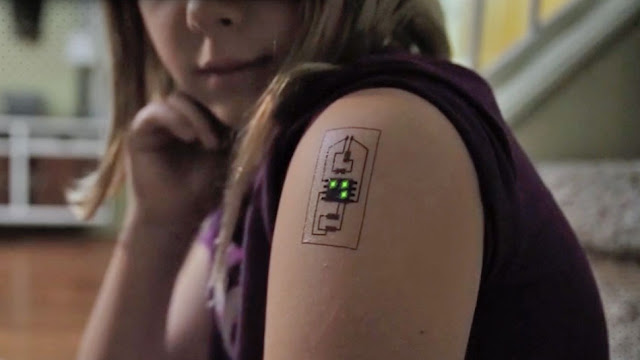 Tattoos that marry art with technology are nothing new at this point. We've seen Motorola show off a tattoo designed to unlock your smartphone and one from another research team that evencollects sweat to produce power.Most of the initiatives are coming from major concerns and are still in the development stage, but a small team called Chaotic Moon has come up with another tech-powered tattoo concept that could work a lot like a fitness tracker in terms of monitoring your body's functions. It is called Tech Tat.

In an interview with Techcrunch, the company says the Tech Tat is made using electro conductive paint and in a promotional video one of the team suggests that it could be used to monitor a person's heart rate, pulse and body temperature.


However, Chaotic Moon, which was acquired by international marketing firm Accenture this summer, is more known for deploying interesting prototypes rather than shipping mainstream products to consumers.
Despite this, the company says the Tech Tat is real and is a working mechanism.
"The Tech Tat is an actual working prototype," Ben Lamm, Chaotic Moon’s CEO, told Mashable. "We are continuing to develop this both conceptually and physically. And we’re making interesting new discovers and applications every week."

But the same small firm was also behind the "flying taser drone," and a flame throwing drone, neither of which you should expect to see in stores anytime soon.
"The flame throwing drone was about us cracking open an open-source drone in order to domesticate the modularity of the tech, beyond using it for video," says Lamm. "It also could spray paint hard to reach places, and shot silly string."
In the firm's latest video, the company says it's "excited to bring [the Tech Tats] to you in the near future," but you shouldn't get your hopes up. Earlier this year, the company talked up plans of commercializing the aforementioned drones, but the site for the drones is still essentially a landing page.
Nevertheless, the company claims it's committed to making the Tech Tat commercial.
"We can't conjecture about when people could get their hands on one," says Lamm. "Typically, we will explore the best partners that would help us get Tech Tats to the consumer."
Whether the Tech Tat idea becomes a product or not, the general concept, which has been around for a while now, is likely helped by showing yet another, more artful way in which it could possibly be deployed in the real world.