Turkey Shot Down Russian Warplane Near Syria Border. Is This the Starting of Third World War" ? 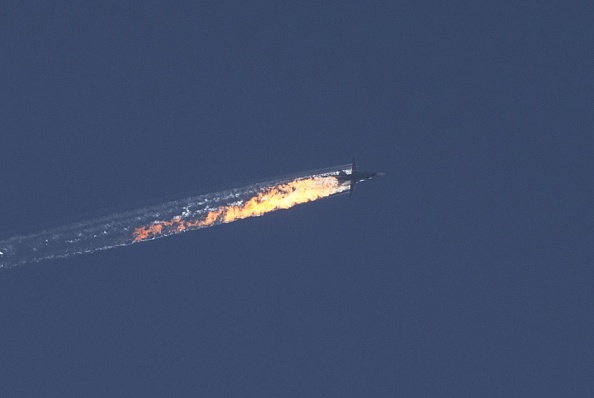 Turkey said it shot down a Russian warplane near the border with northwestern Syria after the pilots ignored repeated warnings that it was violating Turkish airspace.Russia’s Defense Ministry denied that the aircraft had ever left Syrian airspace, while acknowledging that one of its jets had crashed in the country. The pilots are believed to have ejected and a search is going on for them, the ministry said Tuesday on its website.
"IS IT The Starting of Third World War" ?  what do you think?  Tell us your thought is Comment section below.


The Russian warplane was shot down near the border, AHaber television reported. The two pilots parachuted to safety and were captured by Turkmen forces in Syria, it said. Russian and Syrian warplanes have been active in the area, reinforcing Syrian President Bashar al-Assad’s troops against Turkmen fighters.
Relations between Turkey, a NATO member, and Russia, which started a campaign of air strikes in Syria in support of Assad’s forces on Sept. 30, have soured over the Russian intervention. Turkey, which backs rebels seeking Assad’s ouster, has at least twice warned Russia about incursions into Turkish airspace.
Two Turkish F-16 jets “intervened” at 9:24 a.m. after the Russian jet violated Turkey’s airspace, the military said. Pilots warned the Russian plane 10 times in five minutes before it was hit, according to a statement on the Turkish military’s website.
The jet was at a height of 6,000 meters and may have been hit from the ground, the Russian Defense Ministry said.