UW team refrigerates liquids with a laser for the first time 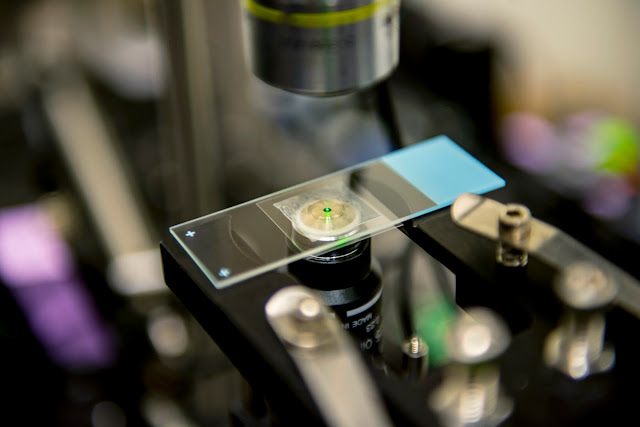 It's true that lasers are often used as heating implements, but a less common use is the cooling of gases and crystals. Now for the first time, a team of researchers has now used an infrared laser to cool liquid by about 20 degrees Celsius (36 degrees Fahrenheit).

The study, led by Paden Roder of the University of Washington, has been published in the Proceedings of the National Academy of Sciences, and can be viewed on arXiv.
"This is the first example of a laser beam that will refrigerate liquids like water under everyday conditions," said senior author Peter Pauzauskie, assistant professor of materials science and engineering."It was really an open question as to whether this could be done because normally water warms when illuminated." 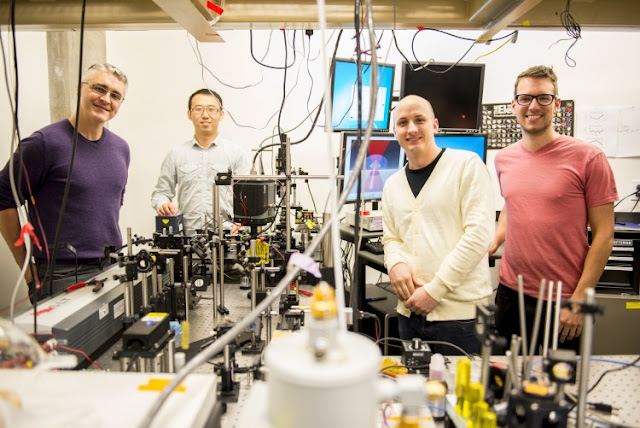 To cool the water involves the use of a blue-shifted infrared laser and a nanocrystal in a drop of water. These blue-shifted photons are absorbed by the atoms in the crystal, which become excited. When the atom releases the photon, it is at a higher energy level than the photon that entered. This carries heat away, effectively cooling the crystal and the water around it.
As the crystal cools, the escaping heat energy glows reddish-green.
"The real challenge of the project was building an instrument and devising a method capable of determining the temperature of these nanocrystals using signatures of the same light that was used to trap them," explained Roder.This research and the ability to accurately cool a tiny area have several potential applications. It could be applied to microprocessors to prevent overheating. It could be used to cool, and therefore silence without damaging, a single neuron, so that researchers can observe how the brain rewires without actually damaging the brain.
It could also be used to slow a portion of a cell as it divides or repairs so that the process can be examined more thoroughly.
"There's a lot of interest in how cells divide and how molecules and enzymes function, and it's never been possible before to refrigerate them to study their properties," said Pauzauskie. "Using laser cooling, it may be possible to prepare slow-motion movies of life in action. And the advantage is that you don't have to cool the entire cell, which could kill it or change its behaviour."
The technology could also be used to create higher-power manufacturing lasers, which aren't possible with current technology because at a certain power level, they tend to overheat and melt. But first, the team has to work on refining the process, starting with improving its efficiency. In its current form, it uses a lot of energy.
"Few people have thought about how they could use this technology to solve problems because using lasers to refrigerate liquids hasn't been possible before," Pauzauskie said. "We are interested in the ideas other scientists or businesses might have for how this might impact their basic research or bottom line."