A single introduction of the Ebola virus led to Ebola outbreak 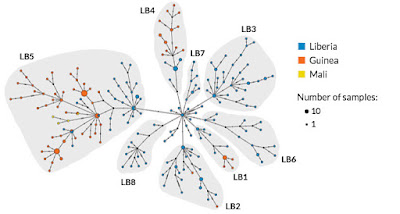 A single introduction of the Ebola virus led to most cases of the deadly disease in Liberia, a new genetic study suggests.
Researchers examined 165 Ebola genomes, most collected during the second wave of infection that started in late May 2014 in the West African country. The analysis, reported online December 9 in Cell Host & Microbe, adds missing information about how the virus spread in Liberia. Previously, researchers had genetically tracked Ebola in Sierra Leone (SN: 3/7/15, p. 12; SN: 9/20/14, p. 7) and Guinea.

Tracing the genetic lineages of Ebola and other viruses may help researchers better understand and control such outbreaks, says evolutionary geneticist Jason Ladner of the U.S. Army Medical Research Institute of Infectious Diseases in Frederick, Md.
Ebola first entered Liberia in March 2014 from neighboring Guinea. That outbreak didn’t last long, ending in early April 2014. One sample in the new study supports evidence that the first wave leaked into Liberia from Guinea.
A second wave started with at least three sources, say Ladner and colleagues. But by July 2014, all of the collected virus samples were from a single lineage called SL2. The virus probably came to Liberia when a woman traveled from Sierra Leone to Liberia’s capital, Monrovia. The SL2 lineage is very similar to other versions of the virus in Sierra Leone, Ladner says.
“We have no reason to think there’s any difference in the function of these viruses,” he says. SL2 was probably successful at spreading because of circumstances. Once the virus was established in the crowded city, people spread it widely around the country, Ladner and colleagues found. As the virus spread, it separated into eight sublineages, each characterized by a separate mutation. This internal spread of the virus is much like what happened in Sierra Leone.
Ebola later spread from Liberia into Guinea at least five times, Ladner and colleagues determined. One of the sublineages was then passed from Guinea to Mali on at least two separate occasions.
One comforting finding is that “the virus is not rapidly mutating or changing into something more virulent,” says Matthew Cotten, a virologist at the Wellcome Trust Sanger Institute in Hinxton, England. The new data from the outbreak in Liberia should allow scientists to assemble a more detailed picture of how the Ebola virus spread throughout West Africa. “It’s a valuable resource,” Cotten says.
In total, more than 28,000 people in Guinea, Sierra Leone and Liberia were infected with Ebola, resulting in 11,300 deaths. Sierra Leone was declared free of Ebola on September 7 and is in a period of heightened surveillance. Guinea has not recorded a new case since October 29. The World Health Organization has twice declared Liberia Ebola-free only to have cases crop up again. The latest was a 15-year-old boy diagnosed on November 19 who died November 23. His father and 8-year-old brother also contracted the virus.