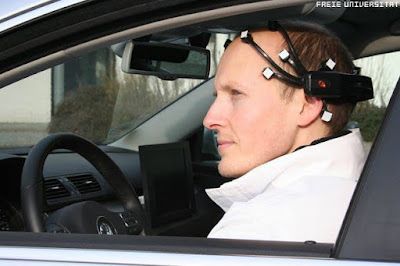 A team at China's Nankai University have developed a prototype of a car controlled by a driver's brain signals. The team is working on technology that uses brain signals to command a car to stop, move forward, backwards, lock and unlock, according to the publication. Zhang Zhao, one of the project's researchers, explained that headgear comprised of 16 electroencephalogram (EEG) sensors, which detect brain activity, is worn by the driver. A computer is then able to analyse and decipher brain signals and translate
them to the relevant automotive commands, he said. Innovation within the field of consumer vehicles is at a high, with the industry being on the cusp of delivering partially autonomous cars.

Google, after many years of testing out the technology, revealed its intentions to release smart automobiles for sale in the next five years. This is backed up by Toyota and Nissan, who have both pegged 2020 as the year in which self-driving cars begin to become a reality for consumers.The technology is still very much a work-in-progress, with the researchers at the stage where their cars, provided by Chinese manufacturer Great Wall Motors, can drive in a straight line using brain power.
The brain-fuelled automotive project was born out of the desire to help physically handicapped people drive, said associate professor and project leader Duan Feng.
It was noted by the team that there are currently no plans to mass-produce the technology.
Associate Professor Duan Feng, from the university's College of Computer and Control Engineering, led the project. He emphasized that the technology is aimed at better serving human beings, and that it might soon be possible to combine brain controlled technology and driverless cars, such as the Google Self Driving Car (SDC).
"Driverless cars' further development can bring more benefits to us, since we can better realize functions relating to brain controlling with the help of the driverless cars' platform," said Duan. "In the end, cars, whether driverless or not, and machines are serving for people. Under such circumstances, people's intentions must be recognized. In our project, it makes the cars better serve human beings."