Donald Trump wants to Close the Internet This Time, Jeff proposes to send him to space 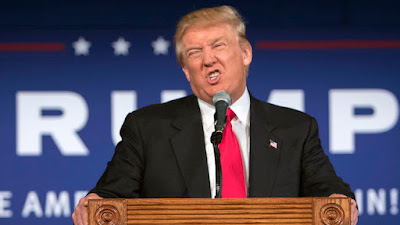 Just hours after proposing a total ban on Muslims entering the U.S. on Monday, Donald Trump shared some ideas on how to solve the problem of the Islamic State (ISIS) recruiting young Americans online, and it involves — partially, at least — "closing up" that Internet thing.
Worry not, however: While Trump has an idea on how to solve the Internet problem, Amazon founder Jeff Bezos has an idea on how to solve the Trump problem. Bezos, who was publicly attacked by Donald Trump yesterday, claiming on Twitter that Bezos keeps the Washington Post for purposes of keeping his Amazon taxes down, has answered by offering Trump a trip into space.


"We're losing a lot of people because of the Internet. And we have to do something. We have to go see Bill Gates and a lot of different people that really understand what's happening. We have to talk to them and maybe, in certain areas, closing that Internet up in some ways," Trump said at a campaign rally in South Carolina on Monday.We'll let you work out the meaning of "closing the Internet up" for yourselves, but it's interesting that Trump thinks this somehow involves seeing Microsoft co-founder and philanthropist Bill Gates. If only the Internet were just a series of tubes, with Bill Gates controlling the main valve, this would be so much easier.