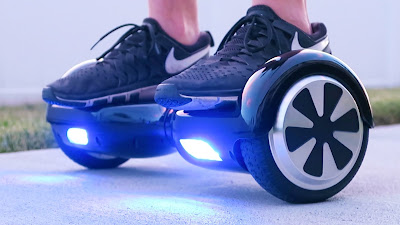 The motorised scooters skyrocketed in popularity this year but there have been several instances of them bursting into flamesTravelers will have to hoverboard home if they’re planning on flying with Delta Air Lines. At other Side Amazon is pulling some hoverboards from its site after numerous reports of fires caused by the popular gadget caused a safety concern.

Links to Swagway, a major hoverboard retailer and other companies have been removed from Amazon’s site, Best Reviews first reported.

Delta has decided to put one of this years must-have toys on the no-fly list after reports of the self-balancing rides exploding.

The ban will be effective starting Friday, the company saidHoverboard fans will not be able to bring their beloved — and potentially explosive — toys on Delta flights as carry-ons or checked baggage.


Delta is the latest airline to ground the hoverboard, as JetBlue, Virgin America, Hawaiian Air and Alaska Air have all prohibited the hot wheels.

American, Southwest and United Airlines still allow the rides on, as long as they meet requirements.

The International Air Transportation Association recommended that the self-balancing scooters only be brought on as a carry-on, but said it's up to each airline to decide."Each airline has to make a risk-based analysis to decide if these items are to be transported or not," Gilberto Lopez Meyer, the IATA senior vice president for safety and flight operations said.

The motorised scooters skyrocketed in popularity this year but there have been several instances of them bursting into flames.

Across the country, disappointed buyers have become victims of the self-balancing wheels turning into an unstable explosive.

Explosions became so frequent that the National Association of State Fire Marshals had issue a warning about the toy.