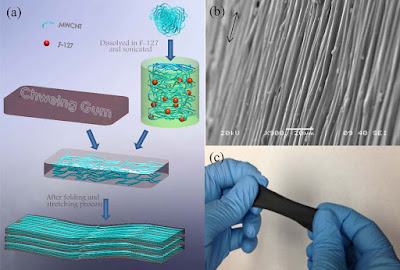 researchers have developed a way to incorporate carbon nano tubes into chewing gum so that the sticky mass can be used as a stretchable, bendable medical sensor. Seems James Bond's next movie gadget?
A team of researchers from the University of Manitoba in Winnipeg chewed Double-mint gum for 30 minutes, soaked it in ethanol to make sure it was clean, then loaded it with carbon nanotubes. The resulting blob was still flexible and bendable and, thanks to the fact that carbon nanotubes can conduct electricity, able to be used as a sensor.


In experiments published in ACS Applied Materials & Interfaces, the team shows that the modified gum works as a smart little strain gauge. That's to say that if you stick two electrodes into its ends and then deform it, the changing voltage between the two points-a result of variation in the sensor's electrical resistance-will tell you how much it's stretched by. The sensor's read out is linear when the gum stretches by 200 percent, and provides useful results until it's deformed by as much as 530 percent.
The voltage changes quickly with deformation, too, so the team reckons that a strip of the gum could be applied across part of the human chest to neatly detect breathing. The fact that the gum is entirely flexible could make it an attractive alternative to most existing medical sensors, that are typically made from metal or plastic, too, because it can more easily move with the body of a patient.
And the best bit? Fortune reports that the sensor could cost as little as $3 to make. Most of that'll be for the nanotubes, rather than the gum, we guess.