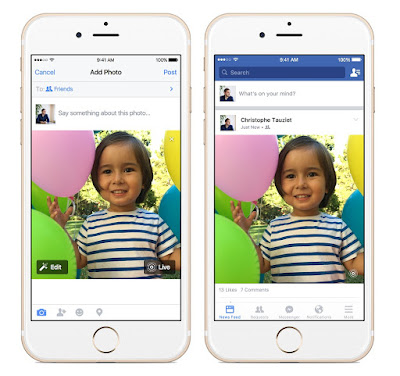 One of the new features in the iPhone 6S and 6S Plus is what Apple calls Live Photos. When enabled in the Camera app, you can tap and hold on a photo to see it animate like a GIF.On Monday, Facebook's mobile app added support for Live Photos so they won't be just viewable in your iPhone's camera roll.
When you upload a Live Photo, Facebook's app will show a little "Live" icon at the bottom right of the image. From the News Feed or a profile timeline, Live Photos
will be displayed with a little circular icon in the bottom right to indicate that they're animated.Any iPhone running iOS 9 (all the way back to the iPhone 4S) can view Live Photos, but only 2015's iPhone 6S and 6S Plus can shoot them.

Facebook isn't the first third-party app to work with Live Photos — Tumblr's iPhone app added support last week.
This should also be a big boost to Apple's Live Photos feature. Until now, the best way to share live photos was through text messages to other iOS devices. Even though any app can integrate Live Photos, relatively few have. But Facebook is the site for sharing photos, and will immediately expose millions to Live Photos.
Meanwhile, Facebook-owned Instagram does not support Live Photos yet, and it's unclear if and when it will.