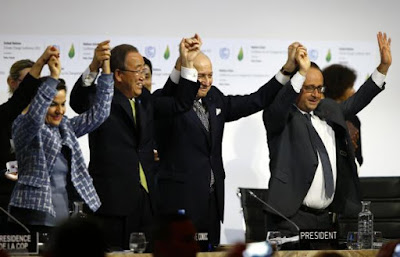 As euphoria over the Paris climate deal erupted, Prime Minister Narendra Modi joined the world leaders in congratulating French President Francois Hollande for the successful Paris summit that went past midnight to conclude in a 14-day high drama in Le Bourget, a Paris suburb.
Sources said the PM called Hollande just before the Paris agreement was to be presented in the conference of parties for adoption and expressed India’s support for the universal and binding agreement achieved a month after the terror attacks hit Paris.


Modi is said to have taken personal interest in ensuring that India plays a constructive and lead role in confabulations as he had a discussion on the proposed deal with US President Barack Obama earlier this week and spoke to Hollande twice on Saturday.
Sources also said that the PM took the briefing from environment minister Prakash Javadekar on the state on play in the negotiations on a daily basis. “The minister had briefed the PM at-least four times in the last few days on every aspect of the deal,” a senior official said.
The global euphoria over the deal was visible when Hollande said at the closing plenary, “You have made history because you were committed. You did not calculate. The world has entered the low-carbon age.”

Leaders speak
UN secretary-general and former South Korean diplomat Ban Ki-moon said there were solid results in all key elements of “ambitious, flexible, credible and durable” Paris agreement.
“You have rightly agreed that the current level of ambition (US $100 billion) is the floor, not the ceiling, and that every five years, beginning before 2020, you will regularly review what is needed in line with science,” he said. “When historians look back on this day, they will say that global cooperation to secure a future safe from climate change took a dramatic new turn here in Paris.”
Environment minister Prakash Javadekar termed Saturday as “historic” and quoted Mahatma Gandhi to say that the present generation had inherited the earth from ancestors as loan for future generations.
“The agreement supports the development imperatives of the developing world and harmonises development with environment protection,” he said, adding that India engaged constructively and in good faith with all 196 countries at the mega summit.
US secretary for state John Kerry said this was tremendous victory for all citizens of the world and future generations.
“We have reached an agreement that, fully implemented, will help us transition to a global clean energy economy and ultimately prevent the worst, most devastating consequences of climate change from ever happening,” he said. “What matters is what we do next, how we implement our targets, how we build this agreement -- that is what will determine whether we’re actually able to address one of the most complex challenges humankind has ever faced,” he said.European Union’s climate commissioner Miguel Arias Canete said he was proud that the agreed has been approved in a European country which had faced terror attacks a month ago.
“We have done what some of us doubted before the start of this conference. We have provided a secure future for next generations and capability to vulnerable nations to meet the challenges of climate change”.
Xie Zenhua, vice-chairman of National Development and Reforms Commission of China, said it was not a “perfect” agreement and there was a need for improvement in certain areas.
“It (Paris agreement) will enhance low carbon green growth and was based on UN climate convention principles and as per the Bali Action Plan. Enhancing pre-2020 and post 2020 commitments were compatible with each other and was reflected balance in the agreement,” he said.