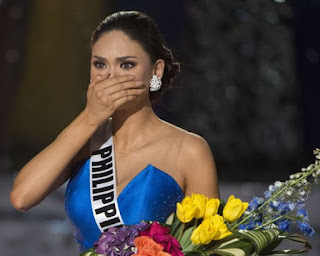 Shock and disbelief have erupted online after the wrong Miss Universe winner was crowned.
Miss Colombia Ariadna Gutierrez was announced winner of the 2015 beauty pageant before organisers revealed she was actually the first runner-up.
Miss Philippines Pia Alonzo Wurtzbach was later declared the winner.
#MissUniverse2015 also became Twitter's biggest trend of the night as thousands of social media users began to express disbelief using jokes and memes."Talk about awkward," described one Twitter user who "couldn't help" but find the gaffe "hilarious".
Another user, Mark Critch from Canada, said: "And the winner is - Miss Information."
Facebook users also expressed their opinions on a post shared on the pageant's official page.

It was shared more than 62,000 times and received more than 17,000 comments from viewers across the world.
"That was poorly handled. Both of these gorgeous ladies deserve an apology because that was embarrassing for both of them. I literally felt both of their pain," read a top comment by Lemmy Cliff.
"That was the most annoying Miss Universe contest ever," said another commenter Andres Felipe Arbelaez. "The host was horrible and Miss Colombia should have won."

Pageant fans from the Philippines also began to express anger at the incident.