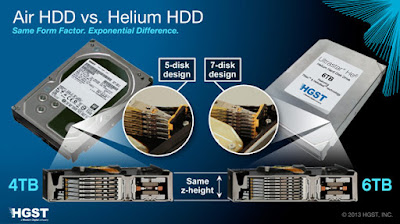 
Besides being filled with helium, the new HDD uses typical perpendicular magnetic recording (PMR) to fit 10TB of capacity on seven platters with an areal density of 816Gbits per square inch.The new HDD represents a 25% increase in capacity over the previous generation 8TB Ultrastar He8 HDD and uses 56% less watts/TB than traditional air-filled HDDs. The drive uses as little as 0.5 watts per terabyte while idle; the SATA model uses 6.8 watts while operating and the SAS model uses 9.5 watts while spinning, which is still 56% less power than the previous generation, WD said.

The Ultrastar He10 also boasts a 2.5 million mean-time-between-failures (MBTF) rating as well as a five-year warranty.

The 7200rpm Ultrastar He10 HDD (see specification sheet) comes with either a 6Gbps SATA or 12Gbps SAS interface and has maximum sustained read/write data transfer rates of 249MB/s and 225MB/s, respectively.

WD is pitching the new HDD as "drop-in" ready, meaning there's no additional software required for the drives to function in a server or array. That's not the case with high-capacity drives that use shingled magnetic recording (SMR) versus PMR technology.

Both WD and Seagate have continued to boost the capacity of drives for archived data using SMR. Seagate, for example, believes SMR holds the promise of creating 20TB drives by 2020.

Unlike standard PMR, where data tracks rest side by side, SMR overlaps the tracks on a platter like shingles on a roof, thereby allowing more tracks to be squeezed together on a platter.Because the tracks are overlapped, the read head on a hard drive using SMR can be half the size of a typical one. While SMR increases density, it also creates the need for additional data management, which slows the read/write rates. That's because when applications attempt to overwrite data or write random data, tracks with existing data are already overlaid with other tracks. That means a host application's data needs to be sequentialized to accommodate a write sequential transfer.
Essentially, an application needs to be "taught to write sequentially" and mainly be for read purposes, which is why both Seagate and WD brand their SMR drives are archive drives versus near-line or primary data drives.

In a statement, WD said it expects its 10TB drives to be key enablers of video, photo, business and other cloud-based applications, and will be a cornerstone for future public and private cloud deployments.

"Netflix has built an industry-leading content delivery network and these 10TB drives will allow us to quickly integrate, build more capacity and stream more movies to our consumers," David Fullagar, director of content delivery architecture at Netflix, said in a statement. "We've been using [WD's] HelioSeal drives for a long time and not only do they give us more capacity, they have contributed to a lower overall power envelope and higher storage density, which has allowed us to maximize our data footprint and create a network that is optimized for TCO."

WD declined to quote a price for the new drive as they're intended for enterprise use.