You Can't Hide in Corners from this New Camera 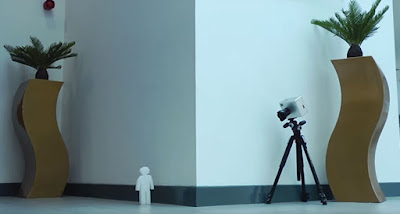 Thanks to a new camera that can see around corners. The device, reported December 7 in Nature Photonics, tracks obscured objects in real time by detecting light echoes, similar to the way bats use sound to find prey. Daniele Faccio, a physicist at Heriot-Watt University in Edinburgh, and colleagues evaluated their camera’s ability to spot Terry, a 30-centimeter-tall foam figurine hidden from view by a wall. The researchers fired a small laser at the floor just beyond the edge of the wall and pointed the camera at a neighboring spot. Laser light bounced off the floor and scattered in all directions. The camera spotted light rebounding off the foam person. While the images didn’t have enough resolution to make out the object’s shape, the researchers could precisely determine its changing position as it moved along a track.

For now, the camera can detect only small objects located about a meter away. But Faccio’s team is working to track human-sized figures hiding meters from the camera. In the future, cars fitted with a similar device could automatically slam on the brakes when a vehicle or pedestrian is about to emerge from around a corner.