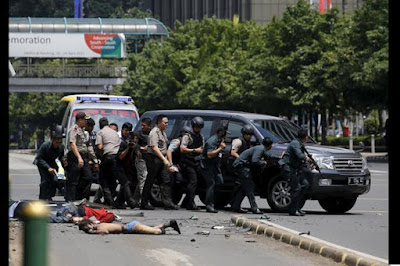 Jakarta: A massive explosion rocked downtown Jakarta in front of a popular shopping mall on Thursday and an Associated Press reporter saw at least one dead body. Gunshots were heard after the midmorning explosion in front of the Sarinah shopping mall and a police station. The area also has many luxury hotels, and offices and embassies, including the French. It was not clear who was shooting but police had cordoned off the area, preventing reporters from going near the scene.
Witnesses said the explosion was caused by a suicide bomber, but there was no immediate confirmation of the claim.
Indonesia has been a victim of several bombing attacks in the past, claimed by Islamic militant groups.

The country has been on high alert after authorities said they had foiled a plot by Islamic militants to attack government officials, foreigners and others. About 150,000 police officers and soldiers were deployed during New Year's Eve to guard churches, airports and other public places.

More than 9,000 police were also deployed in Bali, the site of Indonesia's deadliest terror attack, which killed 202 people in 2002.

On Tuesday, the jailed radical Islamic cleric Abu Bakar Bashir appealed to an Indonesia court to have his conviction for funding a terror training camp overturned, arguing that his support for the camp was an act of worship.

The 77-year-old leader of the Jemaah Islamiyah militant network filed a judicial review of his 2011 conviction, when he was sentenced to 15 years in jail for setting up the camp in Aceh province. A higher court later cut the sentence to nine years.

Indonesia, the world's most populous Muslim nation, has suffered a spate of deadly attacks by the Jemaah Islamiyah network in the past. But strikes in recent years have been smaller and less deadly, and have targeted government authorities, mainly police and anti-terrorism forces.