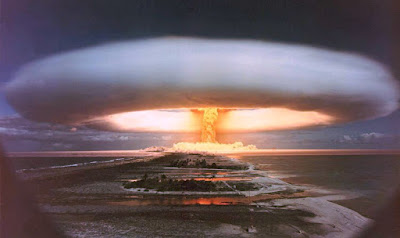 Seoul: North Korea announced on Wednesday that it had successfully carried out its first hydrogen bomb test, a development that, if confirmed, would marking a stunning step forward in its nuclear development.
"The republic's first hydrogen bomb test has been successfully performed at 10 am on 6 January, 2016, based on the strategic determination of the Workers' Party," a state television news reader announced.
"With the perfect success of our historic H-bomb, we have joined the rank of advanced nuclear states," the announcer said, adding that the test was of a "miniaturised" device.

The surprise test was personally ordered by North Korean leader Kim Jong-Un and came just two days before his birthday.The latest test, completely based on our technology and our manpower, confirmed that our newly-developed technological resources are accurate and scientifically demonstrated the impact of our miniaturised H-bomb," the TV announcer said.
The announcement will leave the international community scrambling to verify the accuracy of the North's claims.
Most experts had assumed Pyongyang was years from developing a thermonuclear bomb, while assessments were divided on how far it had gone in mastering the technology to miniaturise a device that could fit on a ballistic missile.
While vowing to stick by a no-first use policy, Wednesday's statement said Pyongyang would continue to pursue an advanced nuclear strike capability.
"As long as the vicious anti-North policy of the US persists, we will never stop development of our nuclear programme," it said