US military rejected Google Robot dogs for being too loud 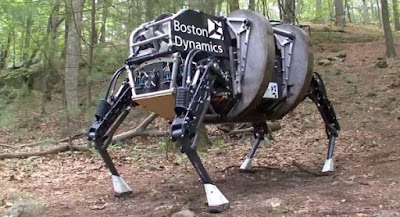 It was supposed t be the ultimate battelfield companion - capable of carrying heavy kit and faithfully following its leader.
However, military bosses today revealed they have killed off Cujo, the four legged robot developed by Google's Boston Dynamics, and its smaller sibling, Spot.
They say Cujo was simply too loud in battle, while Spot was unable to follow troops without help. The Google 'big dog' Cujo was last year tested in its first live military trial with Marines in Hawaii.
Officially known as the 'Legged Squad Support System', it has taken five years to develop.
It can walk and run over rugged terrain, following a soldier while carrying 400lbs of their kit and weapons.


It was tested in the the Kahuku Training Area – completely controlled and field tested by five young Marines from India Company, 3rd Battalion, 3rd Marine Regiment.
However, the experiment also exhibited the shortcomings of the prototype, Kyle Olson, a spokesman for the Warfighting Lab, told Military.com.
'As Marines were using it, there was the challenge of seeing the potential possibility because of the limitations of the robot itself,' Olson said.