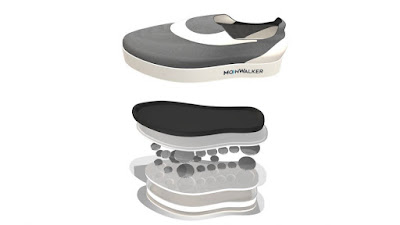 A US-based startup has designed gravity defying, 'out-of-the-world' footwear equipped with superpowerful magnets that simulate the feeling of walking on the Moon.

The shoes named '20:16 MoonWalker' contain strategically inserted magnets at the base to create a force field, leaving wearers light on their feet.

The shoes rely on N45 neodymium magnets, which are among the most powerful permanent magnets known.

There are different levels of magnets, like N40, 42 and 45, and their strength level depends on their composition, which is primarily a mix of neodymium, iron and boron, said Patrick Jreijiri, a mechanical engineer and designer for the shoes.

"N45 is stronger than the rest and still on the cheap side," Mr Jreijiri told 'Live Science'.

The repellent force comes from the orientation of the magnets, which are arranged so that their north poles align with each other.

The magnets range from 2.5 to 5 centimetres (cm) in diameter. The 5cm magnets are strong enough to move 12 kilogrammes (kg) of material, and the 2.5cm magnets are capable of moving objects up to 24kg, Mr Jreijiri said.

The magnets and resulting repulsion cover the entire area of the foot, so when a person is walking, they are pushing against the combined strength of the magnets, Mr Jreijiri said.

The space between the magnets creates a sort of cushion and adjusts to how a person walks, according to the company Moonshine Crea.

The gap also means that an individual's weight would not be a factor in the sensation they will feel while wearing the MoonWalker shoes, Mr Jreijiri said, as long as the wearer is less than 183kg, at which point the magnets would collapse.