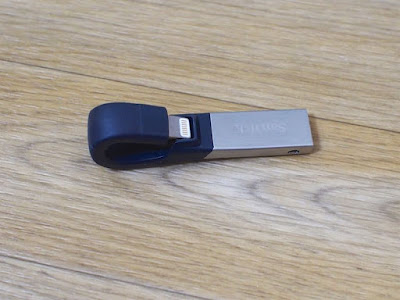 SanDisk released a series of flash drives and mobile memory storage products today. But one product that stood out was the iXpand Flash Drive which lets you expand the storage on your iPhones and iPads. The new iXpand Flash Drive comes in 16GB, 32GB, 646GB and 128GB storage capacities which are priced at Rs 3,990, Rs 4,990, Rs 6,990 and Rs 9,990 respectively.
The new iXpand Flash Drives, to be sold on Amazon, will come with a 2-year warranty and will be compatible with the iPhone 6s / 6s Plus / 6 / 6 Plus / 5s / 5 / 5c / SE and iPad Pro / Air 2 / Air / mini 4 / mini 3 / mini 2 / mini and iPod Touch (5th gen). The iXpand Flash Drive will run on all of the above mentioned products as long as they are running iOS 8.2 or later operating systems.

The new iXpand Flash Drive has undergone a major design change, in the sense that it will no longer have a wide girth or a battery like the first gen iXpand drive. The new iXpand drive has a flexible lightning connector at one edge which can be conveniently placed in the space provided and the other side of the drive is a regular USB 3.0 thumb drive. The flexible neck of the Lightning port creates a closed loop, which you can hang around your key-chain.
The iXpand Flash Drive lets you automatically back up camera roll and contacts and also watch popular format videos from the companion app itself. The new iXpand flash drive companion app has been redesigned and will come with new features such as letting you click photographs right from the app itself which you can store on your phone or on the drive. The app also lets you backup content from your popular social media networks such as Facebook or Picassa.

Apart from this the iXpand Flash drive also includes encryption software which will password protect your files, allowing you to share content while keeping sensitive files secure.