Xiaomi Launched the best-looking consept smartphone of your wildest dreams 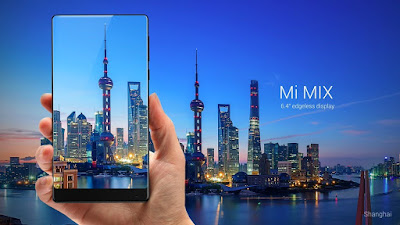 Nothing says sci-fi like a bezel-less screen, and Xiaomi’s newly announced Mi Mix Android phablet is very sci-fi with its 91.3 percent screen-to-body ratio. This 6.4-inch device has just been announced as a concept phone by the Chinese company, but weirdly enough, it has a price, ¥3,499 ($516), and a release date of November 4th in its home country.

Think of every out-there spec you could cram into a phone and the Xiaomi Mi Mix probably has it. The rear of this handset and its side buttons are both made out of
ceramic. The display is curved at the corners — just like that Sharp prototype we recently saw — and all the top-mounted sensors have been removed. The proximity sensor has been replaced by ultrasound, the earpiece has been replaced with a piezoelectric speaker that uses the metal frame to generate sound, and the front-facing camera is relocated to the bottom (though the phone can thankfully be rotated upside down for more flattering selfies).

Inside, the Mi Mix has the latest Snapdragon 821 chip that powers Google’s Pixels, 4GB of RAM and 128GB of storage. Looking at the status bar above, the Mi Mix seems to also have support for two SIMs, a popular feature in China, and
Xiaomi also notes it has a 192Hz / 24-bit DAC chip for higher-resolution audio. There’ll also be a ¥3,999 ($590) option with 6GB of RAM, 256GB of storage, and 18-karat gold accents around the camera and fingerprint sensor on the rear of the Mix. The battery weighs in at a generous 4,400mAh, the rear camera comes in at 16 megapixels with phase-detect autofocus, and yes, the headphone jack is intact.The big deal here, though, is really that design and the incredible display. Xiaomi recruited noted French designer Philippe Starck to lead the design effort — which, frankly, with a display like this basically left him to just say "keep it simple, stupid" for the rest of the device. The Xiaomi Mi Mix is said to launch on November 4th in China, but we can’t imagine there being a great many of them to go around. Hell, the devices held up on stage during Xiaomi's launch event were stuck at the same 8:16 time as on the press image above, so it's not certain that we've even seen a functional unit yet. Xiaomi itself calls the Mi Mix a concept phone ( as well as "a breathtaking work of art that surpasses existing innovations in the smartphone industry"), so the real devices should be quite the exclusive pieces of kit to find.