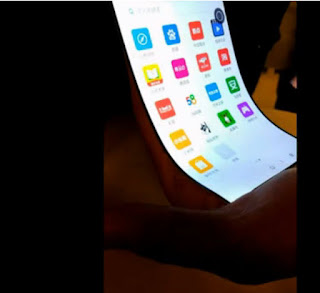 When talking about smartphone innovations, fold-able or bendable displays almost always get a mention. A number of companies are already working on concept devices with foldable displays, and  one such company could be Xiaomi. A couple of photos and a short video clip has surfaced online that shows a bendable display in action and MIUI running on it.
This Xiaomi concept display was spotted on Baidu and it can apparently be bent backwards, forwards, left and right, GizmoChina reports. The 35-second video clip shows a display bent forwards, and we get a glimpse at what MIUI would look like on such a display. Before you get all excited though, we should warn you that this could be a concept or an ardent fan’s fantasy. After all, the photos or video don’t show any electronic components behind the display that are required to connect to a working smartphone. It just feels too good to be true, and we advise you to take it with the proverbial pinch of salt. There are rumors that the upcoming Mi Note 2 will flaunt a curved display, but it is unlikely to be anything like these photos. Instead, the display should be something close to what we see on Samsung’s Galaxy S7 edge and Galaxy Note 7.