Your smartphone Can Be Used as Chemical Weapon! 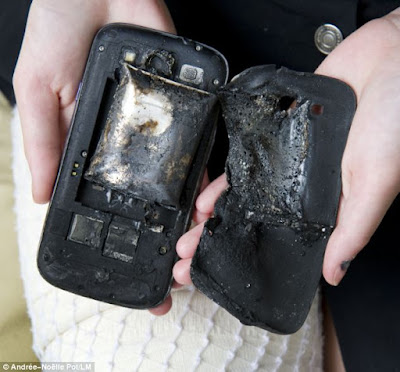 Not just catching up fire or exploding as you sleep next to them, dozens of dangerous gases are being produced by the batteries found in billions of consumer devices like smartphones and tablets, scientists have warned.

The team has identified more than 100 toxic gases released by lithium-ion batteries, including carbon monoxide, which can cause strong irritations to the skin, eyes and nasal passages and harm the wider environment.

According to the researchers from the Institute of NBC Defence and Tsinghua University in China, many people may be unaware of the dangers of overheating, damaging or using a disreputable charger for their rechargeable devices.


"Nowadays, lithium-ion batteries are being actively promoted by many governments all over the world. The lithium-ion battery is used by millions of families, so it is imperative that the general public understand the risks behind this energy source," said JieSun, lead author and professor at the Institute of NBC Defence.
The dangers of exploding batteries have led manufacturers to recall millions of devices.

Dell recalled four million laptops in 2006 and millions of Samsung Galaxy Note 7 devices were recalled in 2016 after reports of battery fires.
"Dangerous substances, in particular carbon monoxide, have the potential to cause serious harm within a short period of time if they leak inside a small, sealed environment, such as the interior of a car or an airplane compartment," Sun noted in the study published in the journal Nano Energy.
The researchers now plan to develop this detection technique to improve the safety of lithium-ion batteries so they can be used to power the electric vehicles of the future safely.