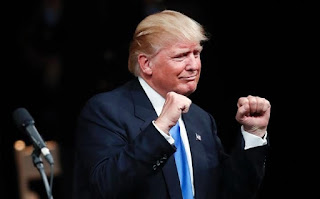 Donald Trump has promised that as president he will honor the pledge stitched into his white and red baseball caps: Make America Great Again.
The former television entertainer’s campaign has been a roller coaster of triumphs and pitfalls, but his love for hyperbole has never wavered.

With him in the White House, Mr Trump has said, his supporters are going to "win so big"  they will soon be "sick of winning".
When it comes to mapping out the details of a Trump presidency, the Republican candidate has been no less extravagant.


It is customary in American presidential elections that a candidate sets out a vision for their first term in the Oval office. But ever keen to be “the greatest”, Mr Trump has slashed the timeline of his proposals from 100 days to one.
At an address delivered in historic Gettysburg last month,  Mr Trump laid out a “contract with the American people” that would begin with a “very busy first day”.

He proceeded to detail 24-hours designed to erase traces of Barack Obama's presidency and set America on a protectionist, nativist, track.
Immigration

Though slightly more carefully worded, his proposal once in office remains some of the most divisive legislation on the issue.

He has quietly dropped his call to remove all undocumented immigrants from the US, a move that, aside from being so impractical it might be impossible, experts have warned would damage the US economy by taking too many people out of the labour market.

Instead he would immediately begin the process of deporting illegal immigrants with criminal records.

Recent studies estimate there are fewer than 168,000 such people in the United States.  But Mr Trump put the number at some two million, suggesting his calculations of "criminals", people who have had minor run-ins with the law, such as getting a speeding ticket.

He will also "suspend immigration from terror-prone regions where vetting cannot safely occur".

Though the terminology is vague, Syria would almost certainly be on this list. Mr Trump has claimed that the government "does not know" who the refugees it lets in are from the country, despite their being scrutinised for up to two years before being allowed to enter the US.

And last but not least there is the wall. This would not happen on his first day, he admits, but eventually a Trump administration would push through legislation "build a wall" along the southern border of the United States and make Mexico bear the costs.

He has not however, explained in detail how this would happen.