Google Released new feature "Instant Tethering" allow users to remain connected to the internet when their connection is lost. 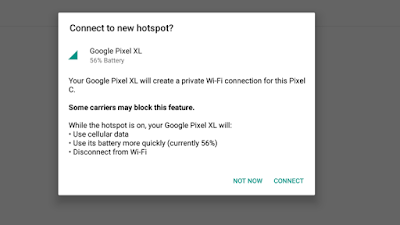 Google has started to roll out a new feature for Android devices that will allow users to remain connected to the internet when their connection is lost. Named Instant Tethering, the feature that is part of Google Play Services 10.2 makes it easier for users to utilize their Android devices as mobile hotspots.
How Does Instant Tethering Work?
According to a post by Austrian journalist Andreas Proschofsky on his Google+ account, when instant tethering is activated, Android devices with no internet connections will be offered to go online by sharing the data of other smartphones and tablets.

The device that would like to go online and the one that will be sharing its internet connection should be linked to the same Google account, with the negotiations of the connection facilitated through Bluetooth.
It is very easy to use the feature, as once the initial set-up of the user agreeing to use it has been completed, there will be no further set-up necessary for Instant Tethering. A prompt will simply appear on the screen of the device with no connection asking if the user would like to connect to a mobile hotspot that will be created by a linked Android device. However, the prompt also warns that the device that will function as the mobile hotspot will use cellular data, will use up its battery quicker, and will disconnect from any Wi-Fi networks that it may be connected to at the time.
What's The Catch? Instant Tethering sounds like a feature that will be very useful for people who own several Android devices, but with only one or two of them having access to mobile data.