WORMS THAT WERE FROZEN FOR 40,000 YEARS, WAKE UP AND STARTED EATING 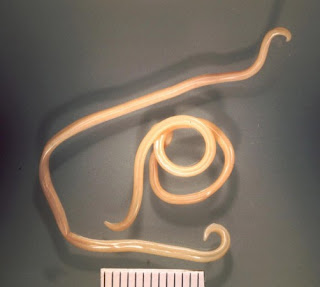 Cryogenic freezing is considered to be more sci-fi than actual science, but now, worms that were trapped, frozen in ice since the late Pleistocene epoch — Ice Age — woke up from the longest nap and started looking for food and eating as if nothing had happened.
Ancient roundworms, also called nematodes were found in a chunk of Siberian permafrost that solidified about 42,000 years ago and remained frozen since then. Researchers who made the latest find discovered that as soon as they thawed, they started moving and looking for food. The team of researchers includes scientists from Princeton, reports RT.


"We have obtained the first data demonstrating the capability of multicellular organisms for long-term cryobiosis in permafrost deposits of the Arctic," wrote the study's authors.
The large chuck of ice contained about 300 roundworms of which two of the females have come back to life say the researchers, who work at the Institute of Physico-Chemical and Biological Problems of Soil Science in Moscow. Scientists involved in the study have declared this finding as groundbreaking.
Now at over 42,000 years of age, the pair of roundworms are the oldest living organism on the planet. "It is obvious that this ability suggests that the Pleistocene nematodes have some adaptive mechanisms that may be of scientific and practical importance for the related fields of science, such as cryomedicine, cryobiology, and astrobiology," said the researchers.
The samples were obtained from two regions in Yakutia, known as the coldest part of Russia. One of the two worms is believed to be about 32,000 years old and came from a squirrel burrow in the permafrost. The other one was found to be around 47,000 years old and was found embedded in permafrost near the Alazeya River.
Permafrost sediments, notes the study, contains a considerable diversity made up of unicellular organisms that survive hundreds of thousands of years in cryobiosis. Of them, several types of bacteria, including cyanobacteria, green algae, yeasts, naked amoebas, moss spores, and the seeds of higher plants, to name a few are known to be capable of germinating after long-term natural "cryopreservation".
This study, however, has claimed to identify the first viable multicellular organisms—soil nematodes, from permafrost deposits.
It may be noted that in 2000, scientists pulled spores from Bacillus bacteria hidden inside 250 million years old salt crystals and managed to bring them back to life.
If roundworms are able to wake up after being frozen solid for an entire epoch, what about humans? As of now, there is no real way to freeze humans and bring them back to life, but this has not stopped people from trying.
In late 2016, reports emerged that a 14-year old girl who was dying of cancer was granted permission by courts in the UK to have her body preserved in the hope that it might be possible that one day there is a cure for her illness and she can be revived, fully cured.
Soon after her death, she was cryogenically frozen and she now resides in a lab in the US, according to a report by The Guardian.