Why ancient people were Drilling holes through each other's skull 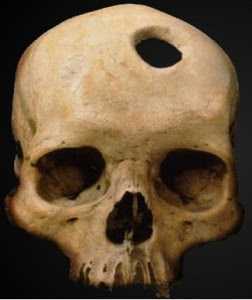 people around the world practiced a crude surgical procedure that involves forming a hole in the skull of a living person by  drilling/ cutting or scraping away layers of bone with a sharp implement.

Thousands of skulls bearing signs of trepanation have been unearthed at archaeological sites around the world. But scientists are still not completely agreed on why our ancestors performed trepanation.
Anthropological accounts of 20th-Century trepanations in Africa and Polynesia suggest that in these cases at least, trepanation was performed to treat pain – for instance, the pain caused by skull trauma or neurological disease. Trepanation may also have had a similar purpose in prehistory. Many trepanned skulls show signs of cranial injuries or neurological diseases, often in the same region of the skull where the trepanation hole was made. But as well as being used to treat medical conditions, researchers have long suspected that ancient humans performed trepanation for a quite different reason: ritual.